The University of Iowa is taking drone research to the next level: in the Cooperative Autonomous Systems (CAS) Lab, undergrads and graduate students work on the future of drone fleet technology that can revolutionize our world.

Cooperative Autonomous Systems – The next generation of drones

As the name implies, cooperative autonomous systems are fleets of different kinds of drones – aerial, ground and underwater – that work together to accomplish missions. 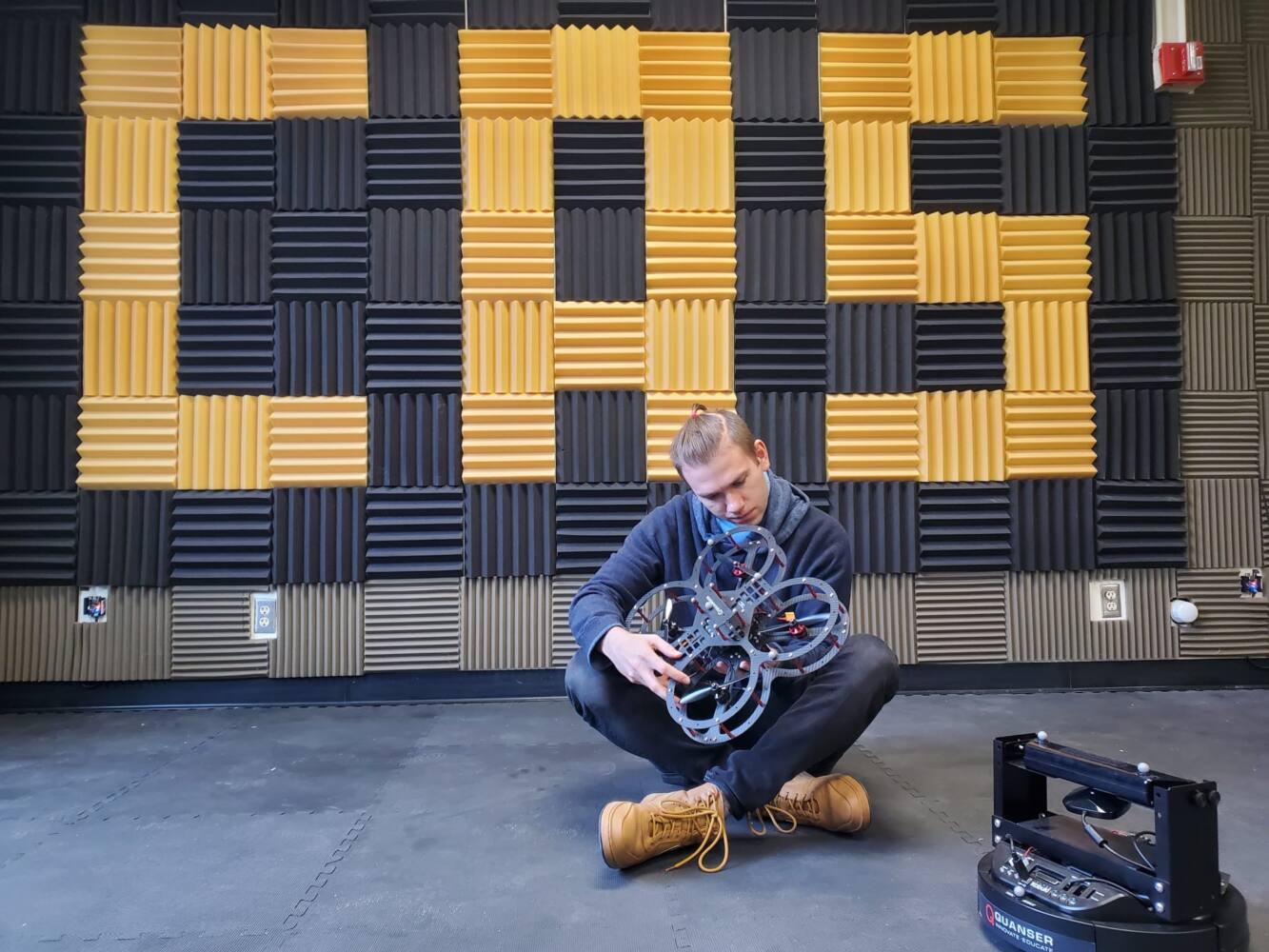 Vladimir Petrov is a 1st year PhD student, and his work focuses on motion planning and collision avoidance for autonomous systems, including marine, ground and aerial vehicles. He plans to validate his work on the Qdrone and the Qbot.

Launched in 2018, the CAS Lab is comprised of six PhD students and four undergrad students and is led by Assistant Professor of Mechanical Engineering Venanzio Cichella. Cichella has been a drone expert for over a decade, doing his post-graduate and doctoral work on single and then multiple drones. Now, his team at the CAS Lab is focused on developing the algorithms that help make heterogeneous groups of drones work together.

The work Venanzio and his team are doing is extremely important. Being able to deploy aerial, ground and underwater drones together on the same mission can have massive impact. With a fleet of different types of drones working together, the array of applications becomes nearly endless. Research, search-and-rescue, commerce, military, exploration…the uses cases are abundant.

Imagine: someday we’ll have self-driving cars on our roads and in the skies, and we need the systems operating those vehicles to communicate with each other in real-time.

Today, applications for this research include:

The CAS Lab team is focused on developing algorithms that can make these missions efficient and practical. “It becomes a problem of finding optimal trajectories or optimal places to go, where the definition of optimal here is key,” says Venanzio. “At the end of the day, it’s a mathematical function that reflects the practical objective that you need to achieve; the practical problem that you need so solve. What we do mainly is to develop algorithms that enable us to solve these planning problems.”

The work is centered around several key areas of research:

To enable this research, the lab has a large padded, open space that can house multiple ground drones and quadrotor UAVs, all surrounded by protective netting and cutting-edge motion capture technology. The drones include Qbots, Qcars and a Qdrone from Quanser, whose controls technology is specially designed for researchers to develop the latest algorithms for mobile robotics.

These Quanser drones have been designed specifically for engineering research; the hardware is equipped with the latest on-board processors, sensors, cameras, vision systems and WiFi capabilities for real-time data transfer, autonomous controls and robust research projects. The Quarc software is compatible with MATLAB, Simulink, Python, ROS, C++ and countless other language and API capabilities. 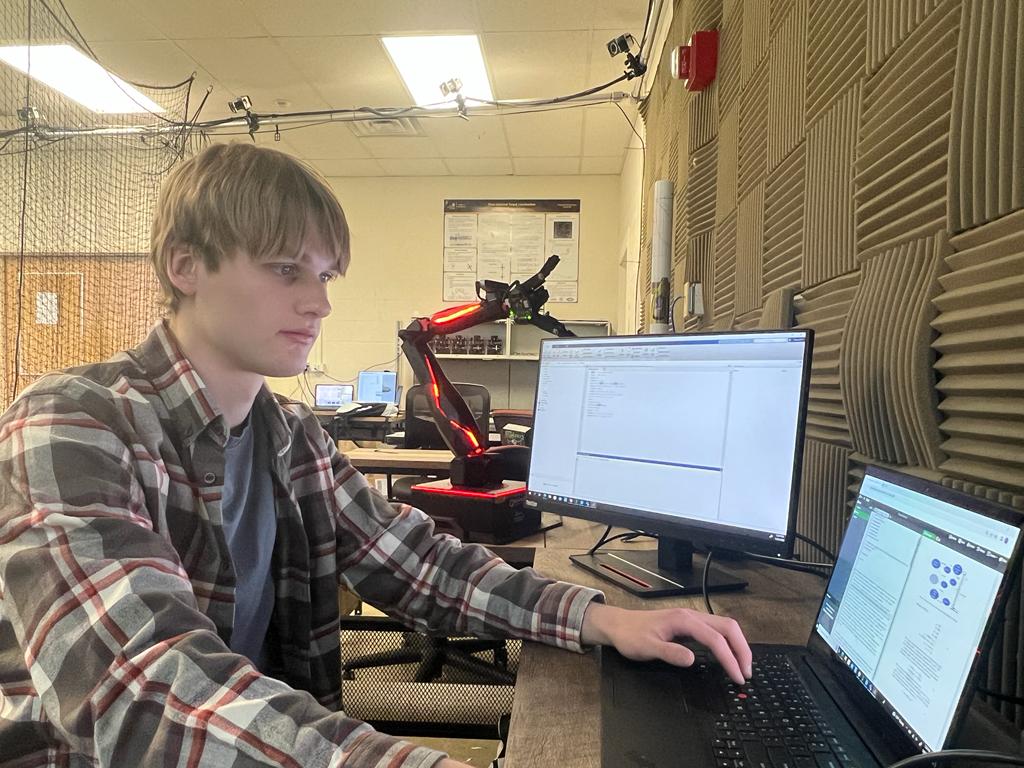 Max Hammond is working on compliance control using numerical methods and non-linear system analysis. His goal is to enable robotic arms to safely move in proximity to and collaborate with humans. He is validating the algorithms using the Qarm. He is a third year PhD student.

Having a drone designed for research has been a huge benefit for Venanzio and his team. “Quanser is very well versed in what concerns education. And they made it easy for us to just bypass many hardware and software issues you can have at the development stage.”

CAS Lab recognized for their work

The work Venanzio and his team have produced has been substantial. They have published over 20 journal articles, conference papers, books, and presentations, all of which are can be viewed on their website. But the accolades have also poured in for individual members.

Team member Calvin Kielas-Jensen is set to receive his PhD in May, the first PhD graduate from the lab. His work on Bernstein polynomials has enabled the team to generate very complex trajectories for the drones quickly, which has massive applications for path replanning and collision avoidance. Calvin also received the SMART (Science, Mathematics, and Research for Transformation) Scholarship from the Department of Defense for this research. Through this scholarship, he will work at the DoD base in Huntsville, Alabama after graduation.

The lab is funded in part through Department of Defense grants, the National Science Foundation, and NASA grants. It also has a strong partnership with the U.S. Navy, actually launching a certificate in naval science and technology in 2019 which focuses on autonomy and its applications for the Navy. Students pursuing this certificate take specialized courses on machine learning, experimental hydrodynamics, and other topics that will translate to their work with the Navy.

At the University of Iowa, the CAS Lab isn’t the only place you’ll find drones. Students in the college of engineering – especially mechanical engineers – can take a number of courses covering drones and autonomous vehicles. Venanzio teaches several of these courses, both at the undergraduate and graduate levels. In his basic controls course, juniors develop control algorithms to stabilize simple mechanical robots, like keeping a ball on the center of a moving plate. Seniors and graduate students can take an advanced controls course that builds up to more advanced and modern techniques, like using control systems on autonomous vehicles. Finally, graduate students can take the cooperative autonomous systems course (which shares a name with his lab), where they’re creating motion planning and time coordination algorithms for multi-drone missions.

To see more of the work being done at the CAS Lab, visit their site or GitHub.

Drones are as popular among universities as they are among hobbyists. Every school has a different approach to integrating this technology into their curriculum – some build it into existing mechanical, electrical or aerospace engineering or computer science programs. Some have dedicated minors and even entire majors to drone technology!

It’s an exciting time to be an engineer, and a it’s great pathway for innovative and creative STEM students to research and build the technology that will drive our future.