What Industry Really Wants From Educators

What Is The “Skills Gap”?
Much has been made of the so-called “Skills Gap” and the importance of focusing secondary and post-secondary programs and curriculum on preparing students for careers in industry. Discussions with many educators, however, indicate uncertainty as to how best to do so.

What manufacturing processes are most prevalent? What skills are most valued by Industry? What skilled trade positions are the most difficult for employers to fill? Many educators are taking their best guesses, being swayed by product-specific equipment suppliers or being influenced by a relatively small number of industrial or manufacturing employers whose needs may or may not represent industry as a whole.

Similarly, discussions with many manufacturers and industrial employers point to a disconnection between them, young people and those responsible for their education. Nearly 200 industrial employers in attendance at a recent national trade association meeting were asked to indicate whether they had, in the previous 12 months, visited their local high school to discuss career opportunities in manufacturing, had invited local high school students to visit their manufacturing facilities or had mentored a high school student in the process of deciding upon a career choice. Less than 5 of the 200 attendees noted that they had done any of these.

Yet a recent poll of more than 23,000 high school students established that, far more than any other factor (including parents, other family members, guidance counselors, coaches, etc.), a student’s career pathway is influenced by his or her own interests and experiences.1

This begs the question that if the single greatest career path influencers are a student’s own interests and experiences, and many young people are not being exposed to potential manufacturing career pathways, industrial skills or manufacturers themselves, is it any wonder that many are choosing career paths other than industry and that the “Skills Gap” perpetuates?

But what is the “Skills Gap”? During a 2015 meeting of CNC and Machining Technical College Program leaders and instructors an attendee asked several technical education product presenters to define the “Skills Gap”. He was offered several vastly different definitions indicating a lack of clarity even among those responsible for assisting educators in closing this so called Skills Gap. 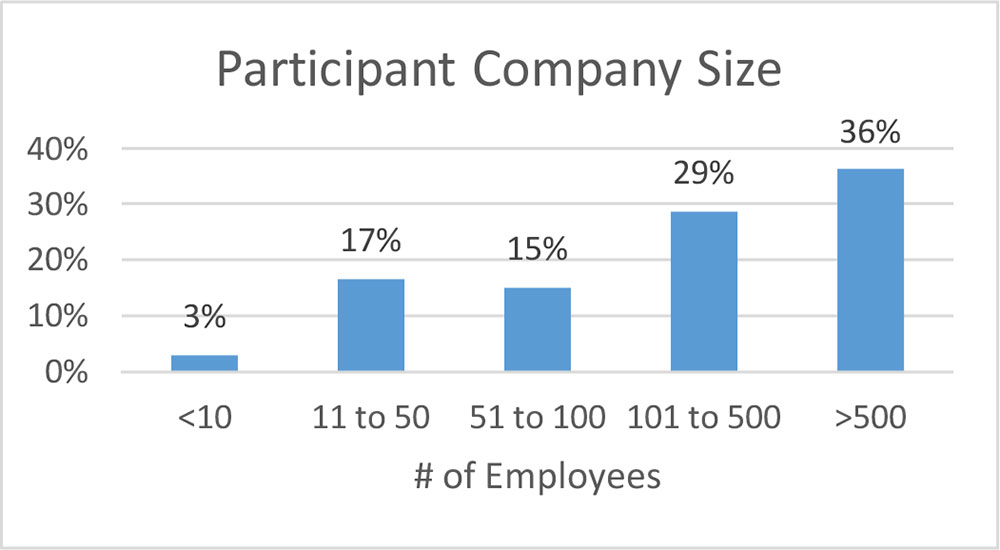 With the intention of providing Midwestern technical educators with the data and insights necessary to match technical education programs and learning opportunities to the greatest industrial needs, and with the goal of exposing young people to true industrial skills and potential career pathways at the time when such decisions are being made, LAB Midwest, LLC of Mequon, Wisconsin reached out to industrial employers and manufacturers across the Midwest for their input. The results provide a much clearer definition of what the “Skills Gap” is and how it can best be filled. 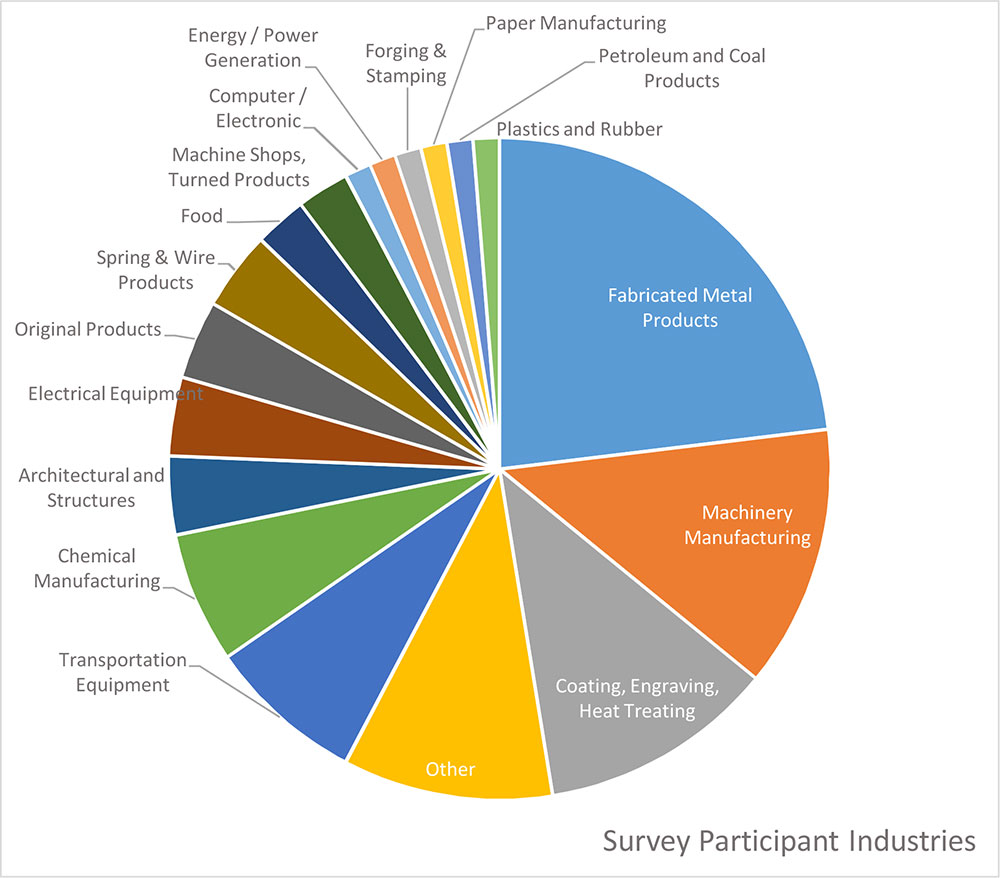 Participants in this study were asked what manufacturing operations were most prevalent, which industrial positions are the most difficult to fill, and which industrial skills and soft skills are most valued in new employees.

The participants represented a wide range of company sizes. Just over 36% of respondents represented employers who employed more than 500 individuals. Examples of such companies include several Fortune 500 automakers, transportation companies and manufacturers of agricultural equipment.

Medium and smaller sized manufacturers, including contract machining, fabricating and coatings companies as well as machinery and equipment manufactures also participated, with 44% of respondents employing between fifty-one and five hundred people. The remaining 20% of participants employed fifty or fewer individuals.

Manufacturing Operations
The respondent companies specified a wide range of industrial processes present in their operations. Among the most common processes were Assembly (66.2% of respondents), Fabricating (64.8%) and Industrial Finishing (60.6%). 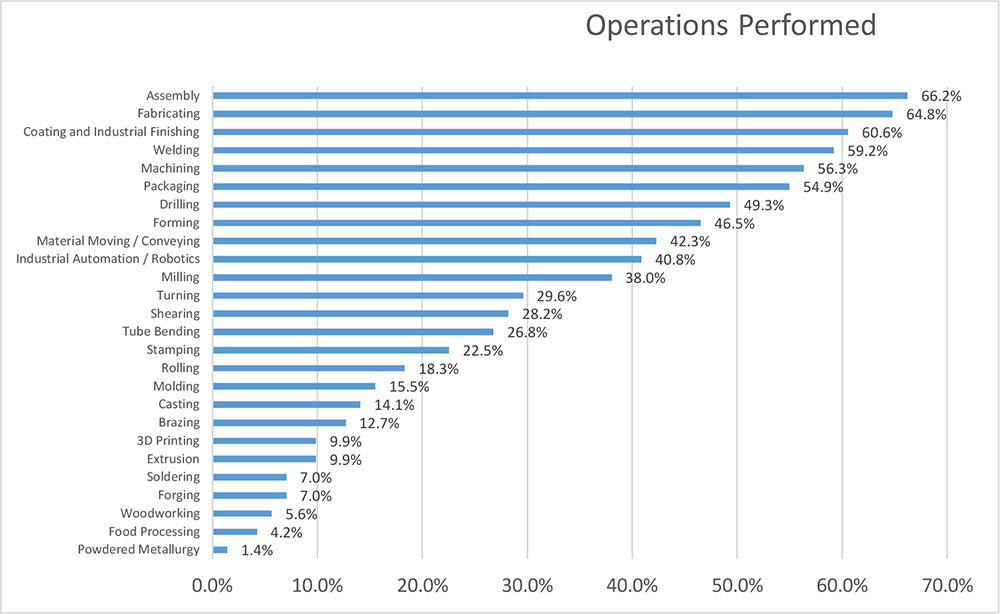 Operations such as Welding (59.2%), Machining (56.3%) and Packaging (54.9%) were also very common. The continuing influence of Industrial Automation and Robotics (40.8%) was also evident in the feedback received.

Conversely, operations such as Woodworking (5.6%), Forging (7.0%) and Extrusion (9.9%) were less common. While Additive Manufacturing / 3D Printing (9.9%) technology may well have a place in the industrial plants of the future, its presence in today’s direct manufacturing processes is low relative to other operations.

Most Valued Skills
In response to the question of which skills they most valued in new industrial employees, participants identified a combination of general industrial and skill-specific aptitudes. For those skills that applied to their operations (in other words, if a skill is utilized in an operation, how important is it?) participants identified as “Extremely Valuable” the Ability to Understand and Follow Work Instructions (Ranked 1), Industrial Engineering (2), Manufacturing Throughput, Productivity and Efficiency (3) and Lean Manufacturing (4) as those most important.

Other notable ranks of the importance of skills included on the list of 50 were Woodworking (34) and 3D Printing (45).

Most Challenging Positions to Fill 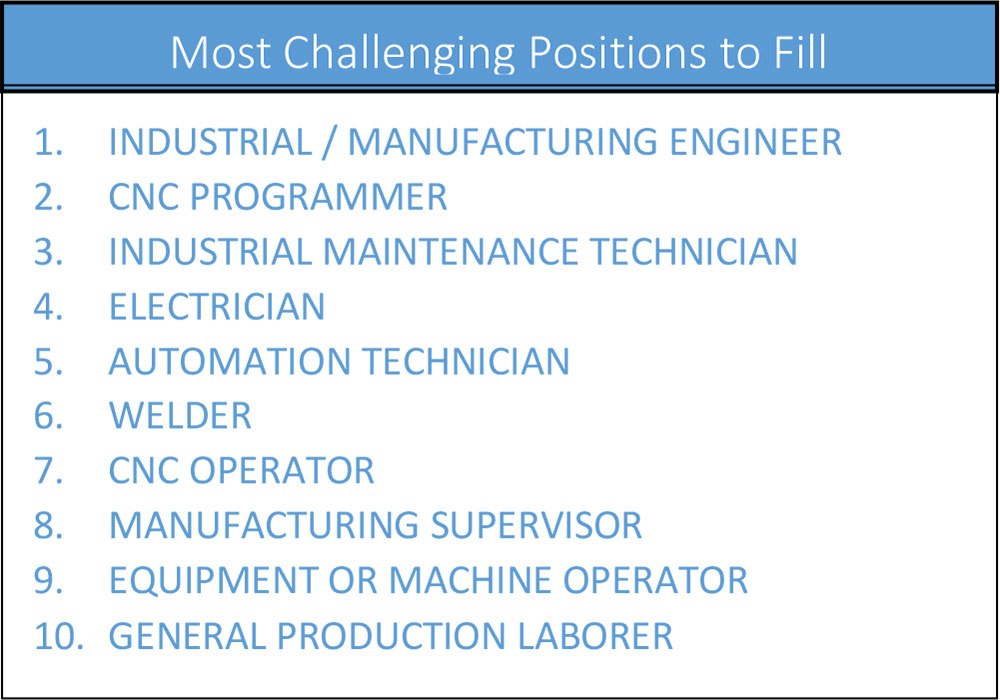 More than any other position respondents ranked that of Manufacturing Engineer as “Extremely Difficult” to fill. CNC related positions also rated high on the list including CNC Programmer (ranked 2nd most difficult) and CNC Operator (7). (It should be noted that, on follow up with several respondents, CNC Operation often involves more than just “button pushing” and includes some elements of setup, setting verification, basic tool and equipment maintenance as well as part inspection.)

Other skilled positions of note were Industrial Maintenance Technician, who require aptitudes in a wide variety of skill sets, including Fluid Power, Motor Control, Motion Control, Process Control, Programmable Logic Controllers, Electricity, and Electronics, which was rated as the third hardest position to fill, followed by Electrician as fourth. Automation Technicians (5) and Welders (6) are also in short supply according to the respondents.

The Importance of Soft Skills 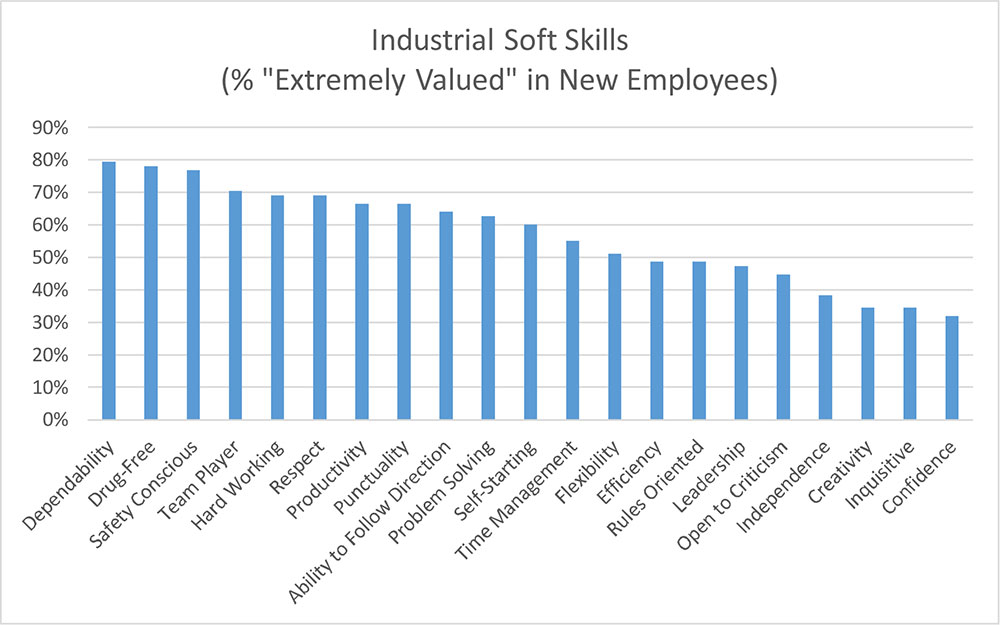 Based both on their subjective comments provided and on their quantifiable responses, Soft Skills are of critical importance to industrial employers. Employers want team members who are, more than anything else, Dependable (ranked 1), Drug-Free (2) and Safety Conscious (3).

A recent study of employees who nominated their employers as “Top Workplaces” referenced the relationships with their co-workers and being treated respectfully by their employers as two of the top three reasons. Industrial employers, likewise, rank Team Players (4) and Respect (6) as high on their lists of valuable soft skills. Rounding out the Top 8 most valued Soft Skills were Hard Working (5), Productivity (7), and Punctuality (8).

Research Methodology
The survey was conducted during the month of February, 2016. 78 industrial employers, selected on the basis of their geographical location and position or job title, participated.