The event is the first robotics competition in the state to take place on an industrial-grade platform, combining the competitive spirit built by organizations like Lego League and FIRST Robotics with authentic industrial skills in high demand in the workforce. 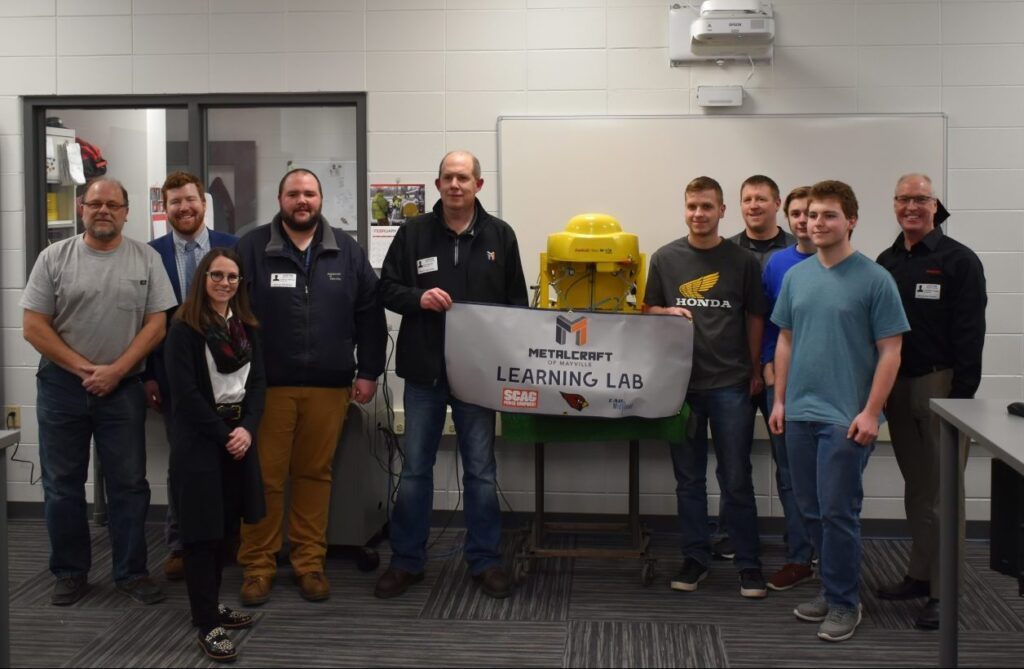 23 teams from across the state came to Wisconsin State Fair Park to compete. Their challenge: write an original program to carry out a proposed task on a FANUC LR Mate 200iD robot, then successfully operate the robot performing the task. All this was to be completed in three hours.

Myles Adamavich, Matt Schneider and Tanner Wiedmeyer of Mayville High School received the highest marks for their programming skills and the effectiveness of their solution. Jon Potter, Regional Director for Robotics Education at FANUC, commented on the ingenuity of their program. “It was brilliant,” he said.

In an awards ceremony last week Potter, along with representatives from LAB Midwest and Metalcraft of Mayville, presented the team with their first-place prize: a FANUC M-1iA delta robot.

LAB Midwest has been working with Mayville High School to add more automation and Industry 4.0 equipment to the school’s technical education program. Thanks to sponsorship from industry partner Metalcraft of Mayville, the school has added a FANUC Robotic Weld Cell, Robot-Loaded CNC Machining Center, and a FANUC LR Mate robotic arm.

The new delta robot will add another dimension of robotic learning. With experience on this equipment, students like Adamavich, Schneider and Wiedmeyer can get hands-on skills that directly translate to high-demand jobs in Mayville and across the state.

The Team Robotics Competition was developed to give students a chance to showcase these types of industrial automation skills. For this reason, the event was strategically held at the Wisconsin Manufacturing and Technology Show (WIMTS), a tradeshow attended by thousands of industrial employers.

Teams had to demonstrate hard and soft skills used in the workplace: teamwork, creativity, working under pressure and time restriction, as well as robotics knowledge, programming, flowchart writing, testing and operation.

It’s no secret that employers are having a hard time finding skilled workers. At WIMTS, they were able to see students performing exactly the types of skills they’re looking for.

Kent Lorenz, Vice President of the Wisconsin Technical College System Advisory Board, who also pioneered the development of the competition, remarked on the positive feedback from employers:

“One of the comments from employers is that most of the high school robotics competitors could get a job in industry right out of high school…It’s nice to see young talent evolve this way.”

FANUC has also invited the team to showcase their program at the International Manufacturing Technology Show (IMTS) in Chicago in the fall. IMTS is the world’s largest industrial technology show, hosting over 130,000 attendees from all over the world.

It will be an opportunity for Mayville High School to show the world how advanced manufacturing education is changing the lives of students and preparing them for bright futures.

Learn more about the Team Robotics Competition or FANUC Robotics for education.